At Silver Creek Feeders, we take pride in running a family business that focuses on integrity, knowledge and stability. Our family has been feeding cattle in this location for four generations and we’ve built success by creating strong relationships with our customers. Our goal is to help our customers identify and capitalize on economic opportunities to maximize profit and secure long-term sustainability in this business. Silver Creek Feeders can take you in the right direction for several key reasons:

Our geographical location. Our close proximity to four of the country’s leading packers gives our customers a competitive edge when it comes to marketing and transporting your cattle. We are also located in Iowa, the heart of the nation’s corn country, with 13.2 million acres of corn grown in our home state last year. This translates into lower feed costs for you and competitive gains for your cattle.

We are committed to the environment. Silver Creek Feeders is committed to environmental protection and economic sustainability. For four generations, our family have been effective stewards of the land and our natural resources.

We are constantly looking for ways to maintain and improve environmental quality while lowering our operating costs.

We recognize the importance of the consumer. Ultimately, our livelihood depends on the consumer who wants a quality and safe eating experience every time they buy beef. They want to trust where their product came from and be able to know that it was raised in a humane and responsible way. Working together, we can provide a safe, wholesome (and delicious) product for consumers.

Silver Creek Feeders welcomes your inquiry. We are committed to agriculture, our customers, and the cattle business and look forward to being a part of your success.

When considering a feedlot, location is key.

Located in the heart of the Corn Belt, Silver Creek Feeders offers you low-cost, high-quality feeds, moderate temperatures, and the best marketing options for your cattle.

Feed Costs 12% Less than in the High Plains

Silver Creek Feeders is positioned in the middle of the Corn Belt. For many years, Iowa has been the undisputed leader in corn production. Our fertile soil combined with adequate precipitation produces the lowest-cost, highest-quality feedstuffs in the country. Our customers benefit from feed costs that cost an average of 12% less than in the High Plains.

The Midwest is known for its moderate climate. We lack the bitter cold and wet of the north and the extreme heat and dust of the south. This means your cattle won’t be standing in mud during the winter, nor will they be at risk for dust-induced pneumonia and heatstroke during the summer.

Silver Creek Feeders lies within 150 miles of four major packers. When Tyson-Dakota City, Excel, Nebraska Beef and Greater Omaha need cattle to harvest, they come to the yards nearest their plants where they can be assured of the quality and condition of the cattle. This packer confidence results in better than average bids from the end buyer.

Silver Creek Feeders is a 3,500-head capacity feedyard. We have fifteen open lot pens ranging in size from 80 to 200 head capacity per pen. We also feature a 1,000 head monoslope building with four 250-head pens.

A great deal of forethought was put into the design of our yard. Long before government regulations, our ancestors sought to achieve maximum advantage from the region while protecting our natural resources. Unlike the dry High Plains region, we have sufficient precipitation to guarantee a plentiful supply of pure drinking water for your cattle. The slight slope of the Loess Hills provides excellent drainage and keeps the pens clean and dry year-round. Because of our southeastern exposure, we have reduced solar exposure in the afternoon and our evergreen windbreaks shield our cattle against harsh winter winds. The wastes generated are recycled into an economical and natural fertilizer used by area grain farmers.

Silver Creek Feeders has a solid reputation for putting into use many new and innovative practices. Our small size allows us to implement the newest technologies more quickly and effectively than the large yards.

From pre-shipment to harvest, our advanced computer and record-keeping systems will provide you with completely detailed, itemized, accurate, and timely information necessary to make sound business decisions.

Yardage, markup percentages, chute charges, pharmaceutical markup and projected cost of gain can be obtained by contacting us.

Please contact us for more information about our financing program.

Our current feeding program is closely monitored by our consulting nutritionist and consists of a highly efficient, cost-effective ration that uses the following ingredients: high-moisture and dry corn, hay mix, liquid protein supplements and wet distillers’ grain. Also included in the ration is a complete vitamin and antibiotic package that addresses the specific nutritional needs of each category of cattle on feed.

Our animal health program is a highly advanced program that addresses every possible health situation in a methodical manner from treatment to prevention. Treatment regimens are carefully studied and antibiotic sensitivities are monitored by our consulting veterinarian to insure proper treatments. 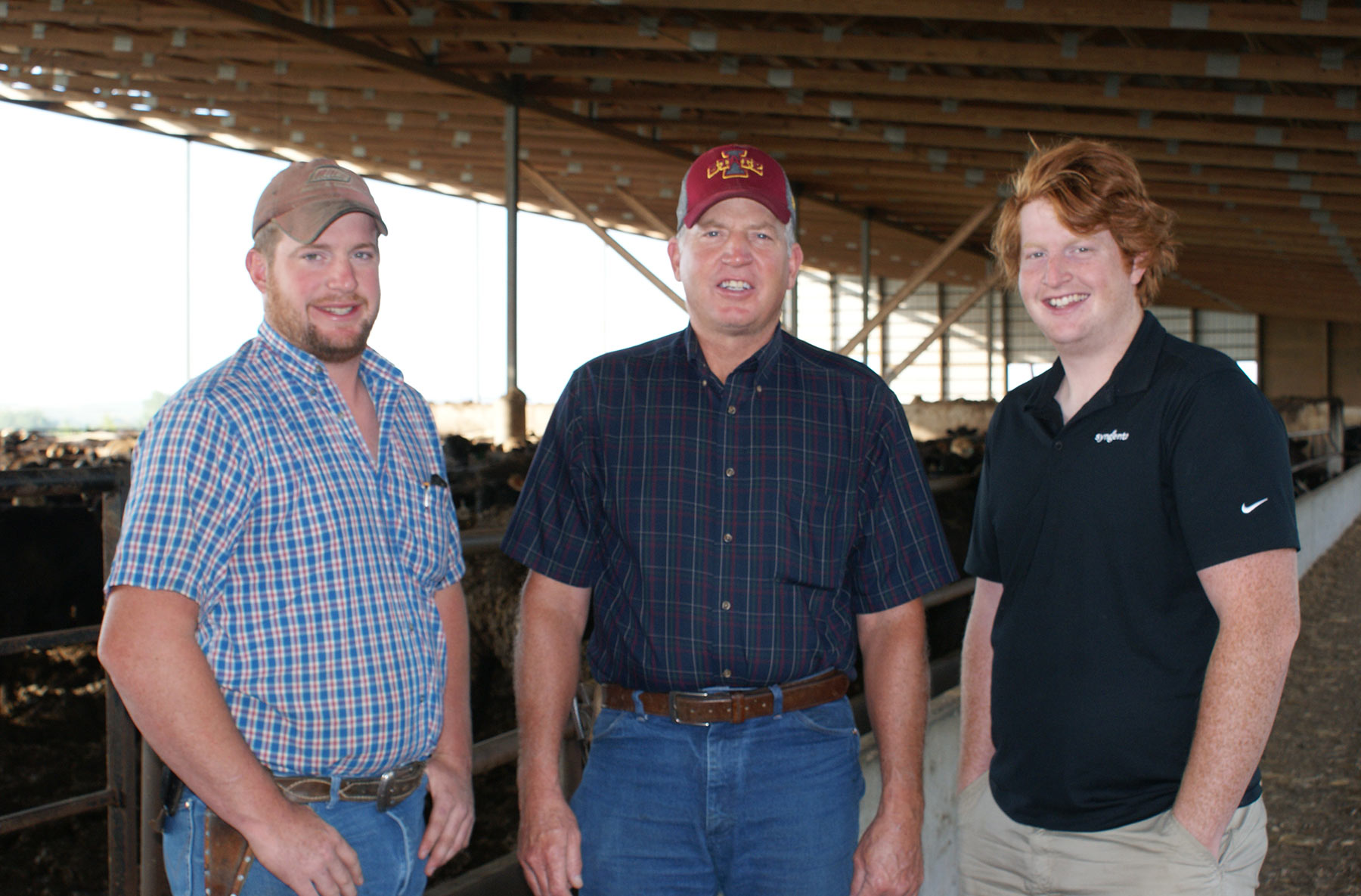 We all know of someone who has fed at one of the super-sized feedlots and come away confused and frustrated by the experience.

Wherever you house massive amounts of cattle, you’re going to rely upon a lot of employees. And no matter their position or profit-sharing package, these employees at the big lots cannot provide the level of specialized care and feeding for the cattle that a feedlot owner can.

Because of our small size, all of us are working with and caring for your cattle — employees, overseers, and owners alike. Because we have the same person riding pens every day, our average death loss rate is lower than the industry average, and sick cattle have a shorter recovery time.

This hands-on approach is what has helped us to succeed for four generations.

In 1927 a newly-married Harry Husz purchased a tract of land in southwest Iowa near what is now Treynor, Iowa, from his bride’s father. Despite hardships and setbacks, Harry and his family were able to flourish and grow the operation.

Harry’s son-in-law, Robert Chambers, joined the operation in 1949. Robert shared Harry’s enthusiasm and they worked together for nearly 20 years. Robert became a pioneer in land stewardship and conservation. Under Robert’s direction, a feedlot expansion plan with an emphasis on conservation was implemented.

In 1982 when Robert became ill, his son, Roger Chambers, took over the operation. Roger has worked hard to grow the feedlot while honoring his father’s environmental legacy. With over 20 years’ experience, along with his understanding, his progressive attitude, and his accessibility, Roger has become one of the most successful feeders in Iowa.

Roger’s ingrained understanding of the cattle business, progressive attitude, and accessibility has helped Silver Creek Feeders succeed over the years. He has served on numerous committees for the Iowa Cattlemen’s Association and National Cattlemen’s Beef Association. Roger continually works to be a low-cost producer for cattlemen, whether it’s through his implant and preventive health programs, supplementation programs, or forage production.

Roger works tirelessly to keep our customers informed. He communicates with our customers regularly and visits their operations many times a year. He provides our customers with the one-on-one attention they deserve and appreciate.

Today, Roger is joined by his sons, Barrett and Kellin Chambers. Both brothers, members of the Iowa Cattlemen’s Association, work on the feedlot full time. Kellin participated in the Iowa Cattlemen’s Young Leadership program. Barrett maintains all our crop production, planting, equipment maintenance, and harvests. Kellin is our agronomist who tells us what to plant, when to spray, and runs the day-to-day operations. Together they work as a quality management team that focuses on customer care, low-cost production, and technology. Our sons cover so many of the bases and keep this operation running smoothly. Family is the heart of this business, and we’re proud of them.